I’m currently developping a fantasy world based on food as a personal project. It is really fun but looking at references can make me really hungry! 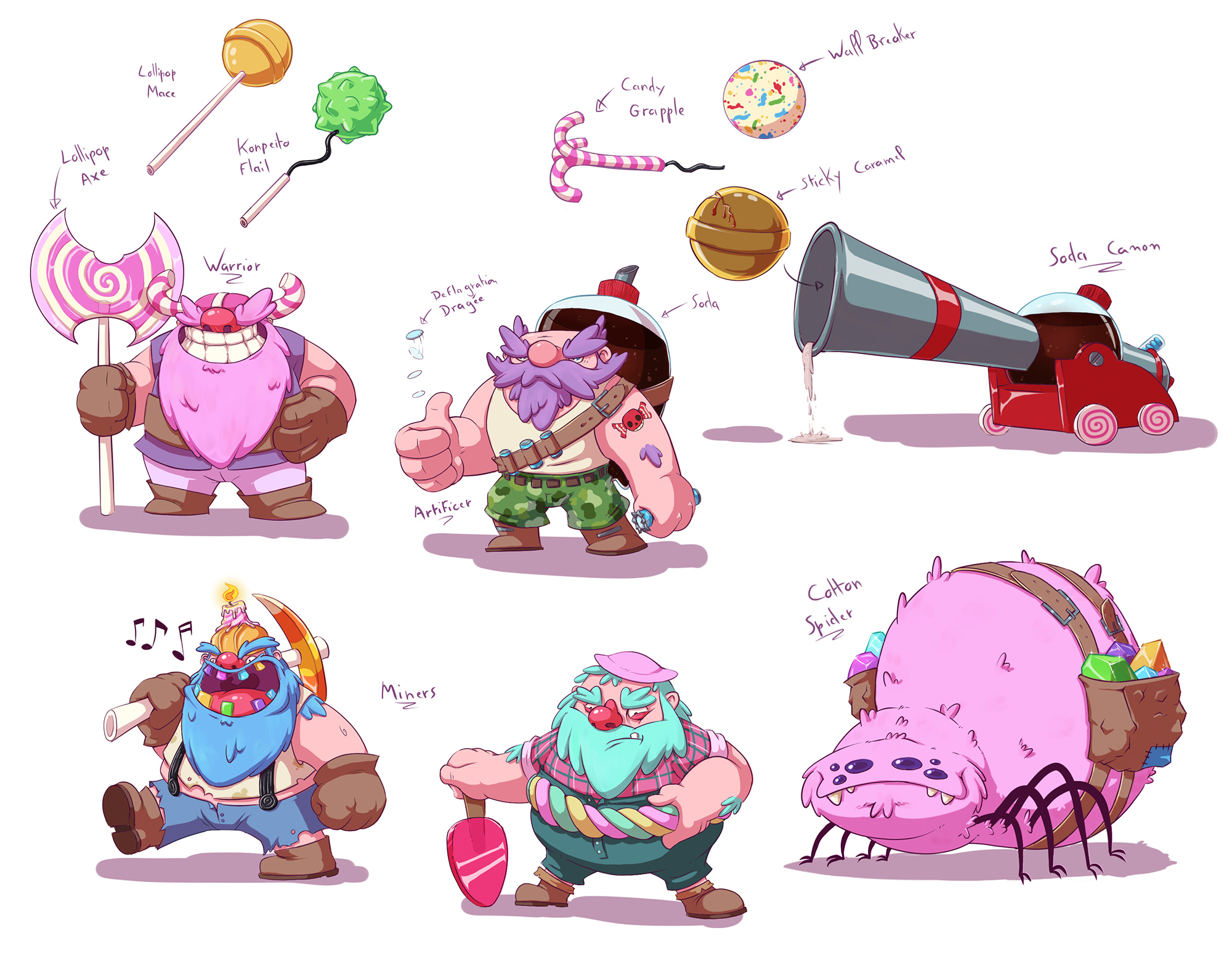 Dwarves are masters in exploiting the rock candy mines. Using this precious ore, they forge the best weapons in the known world. Their greatest technological feat was to canalize the explosive reaction occurring when an underground soda lake comes into contact with mentosite minerals into a powerful ranged weapon… 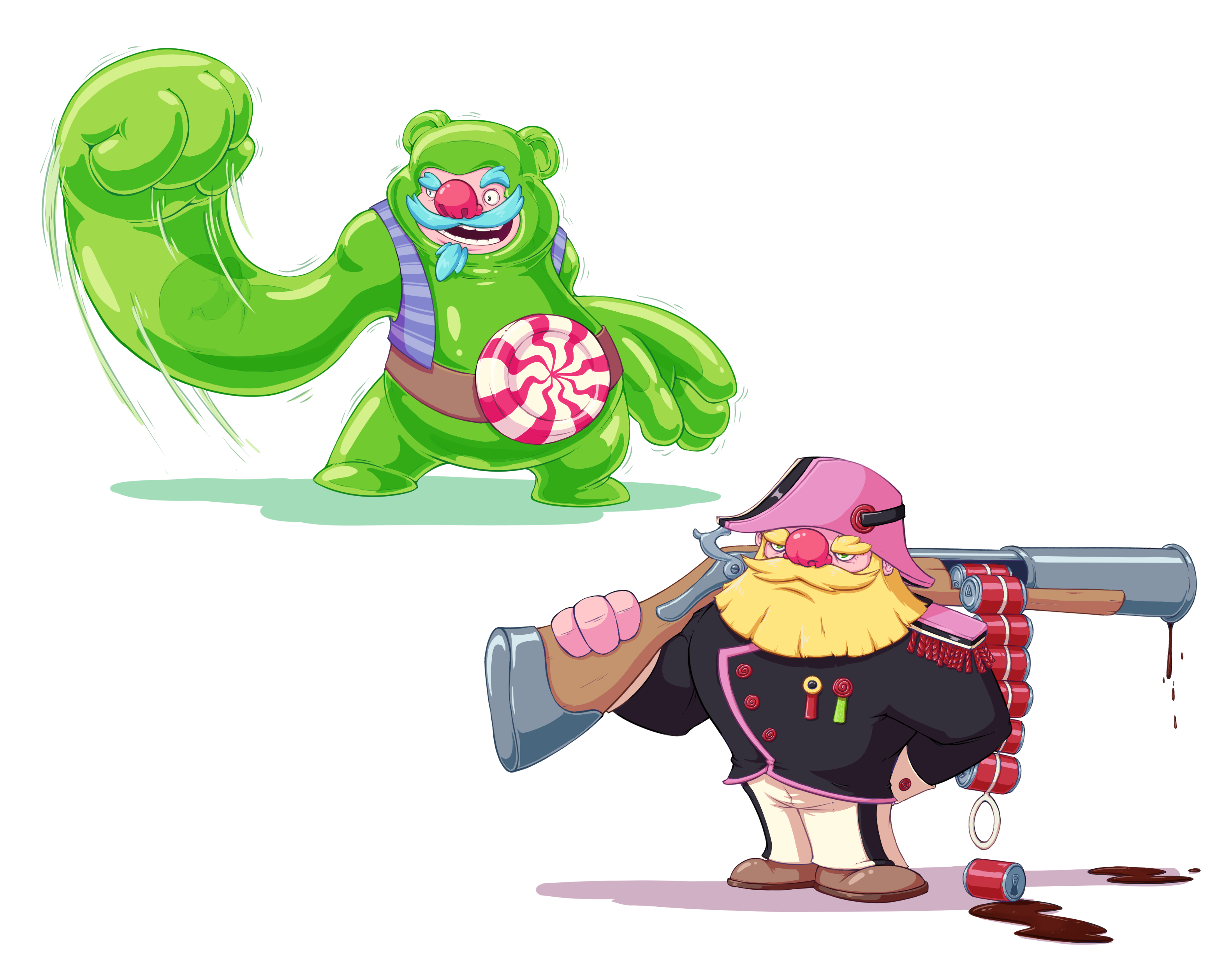 After the invention of the soda cannon, an innovation thirst shook the overly traditional domain of candy weaponry. Following this trend, Captain Licorice created a prototype for a portable soda canon.

Another inventor managed to transform sugar crystals into a material both solid and elastic, able to absorb even the most violent impact. Carried away by his discovery, he decided to immediately mold an armor around himself: the operation was a success, the Gummy armor making him practically invulnerable … but the material was so strong that he remains trapped inside since then. 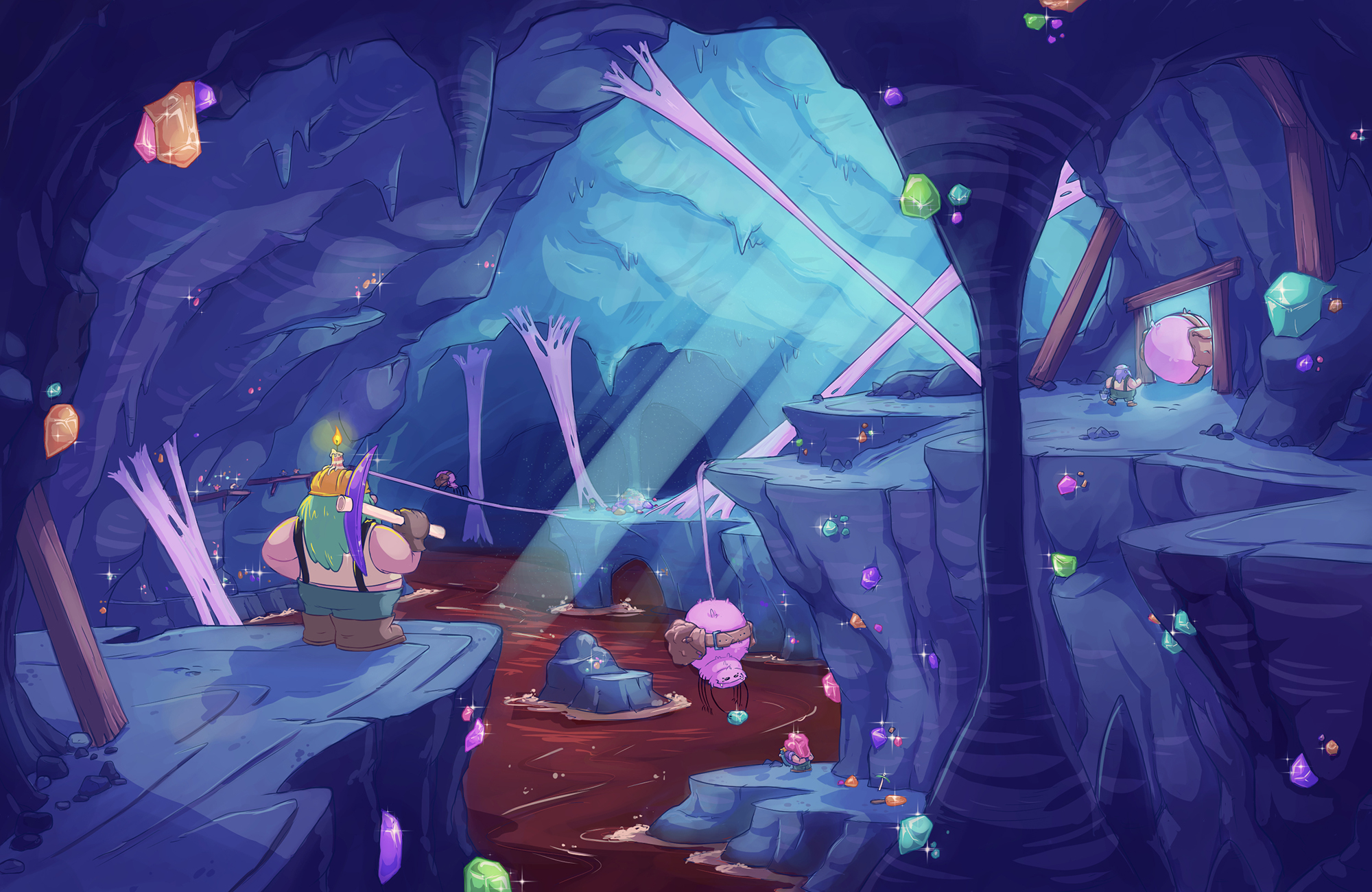 Cotton spiders were domesticated by dwarves to carry candy crystals ages ago. Their ability to build webs made of the candy floss they produce is especially useful to navigate in the complex layout of the mines. 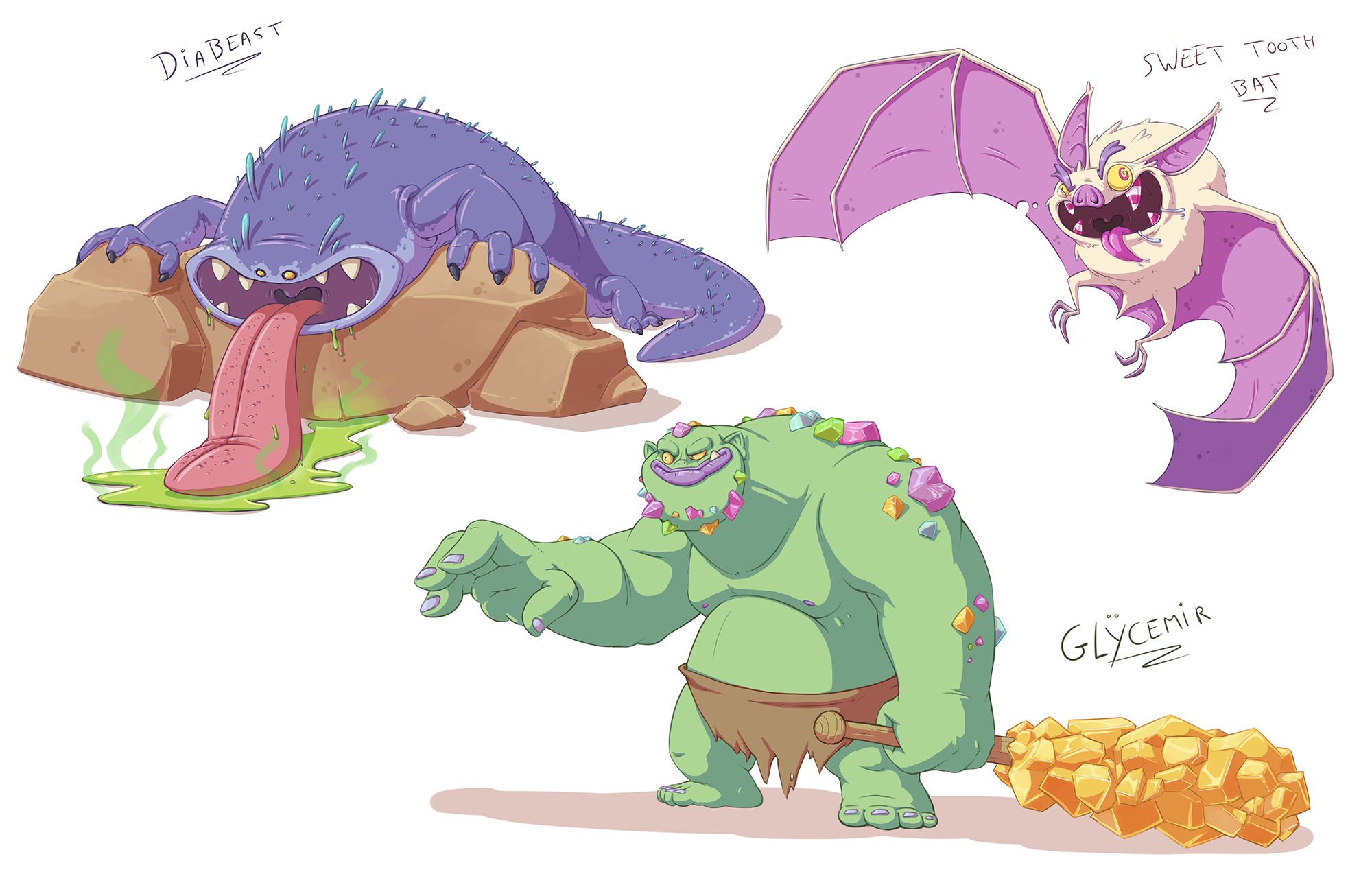 Dwarves aren’t the only ones to spend time in the candy mines… and some encounters can be deadly!

The sweet tooth bat can absorb blood sugar with its bite, causing hypoglycemia. They become especially aggressive in withdrawal phase.

Thanks to their powerful jaws, glycemir giants can feed on raw rock candy. They also integrate the crystals in their skin to act as a physical protection… It is not rare that a dwarf dies under their club after having mistaken the back of glycemir with a rock full of precious ore.

The creature the dwarves fear the most is the fierce diabeast. Thanks to it corrosive saliva and powerful tongue, it can dissolve even the most solid candy weapon with just a few licks. A nightmare for every dwarf blacksmith! 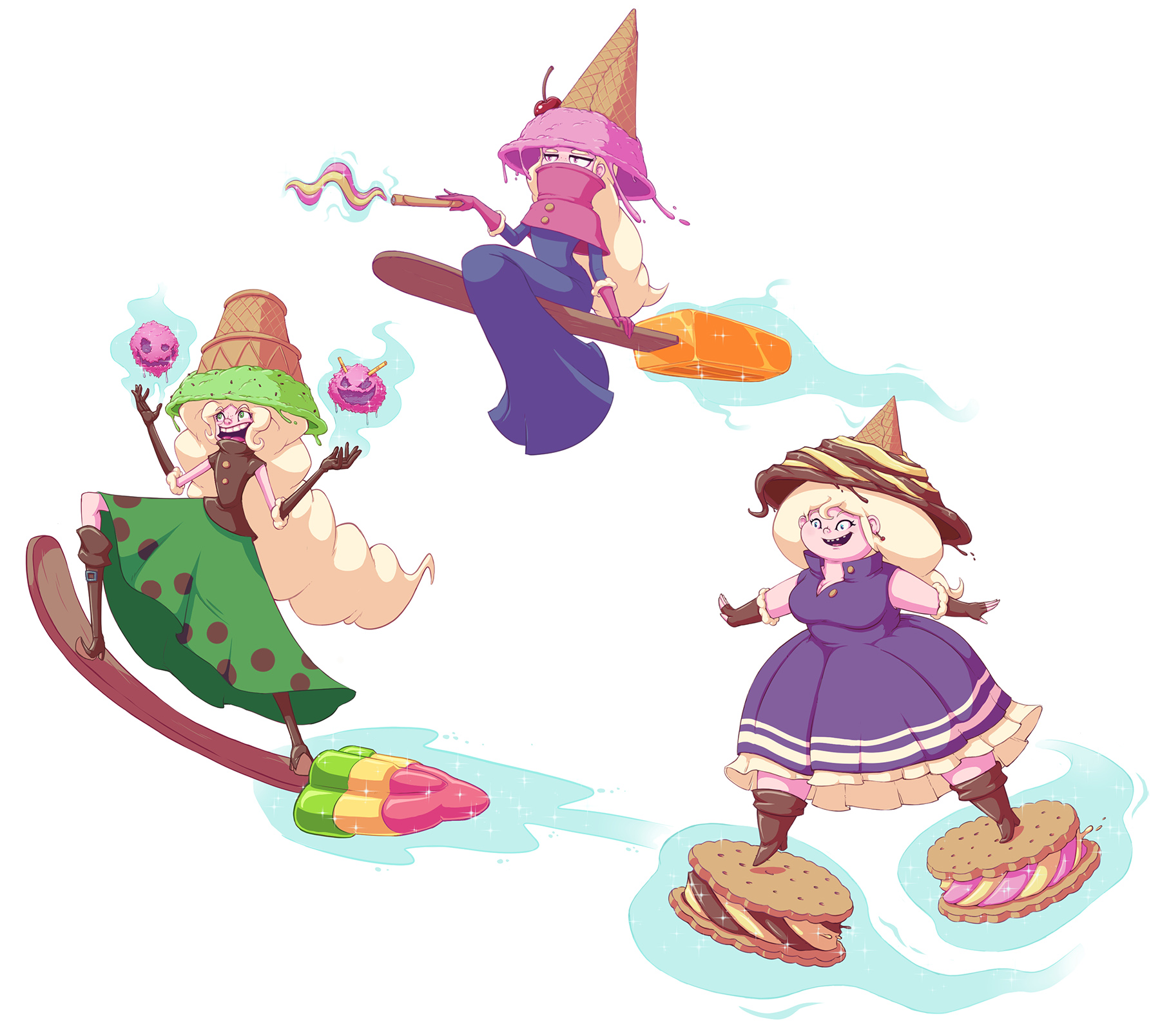 Ice witches have the ability to tap into the magic energies and flavors trapped within the Sorbet glacier since ancient times. They always carry their ice cap, as well as other artifacts, made from pieces of glacier to use as a catalyst for magic. 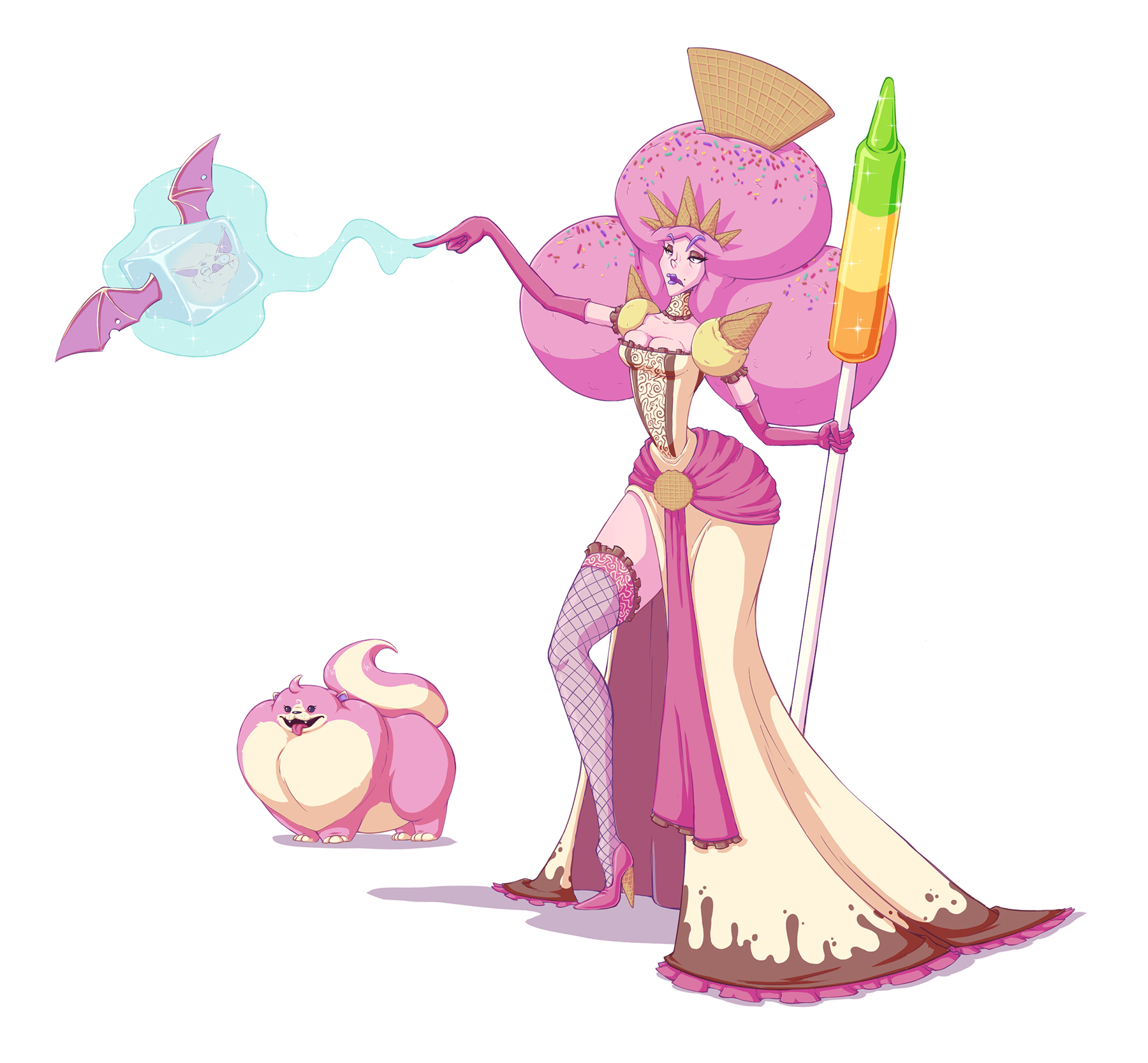 Among them, the Ice Queen is not very popular. After all, witches are inherently allergic to vertical hierarchy … and she decided she would be queen all by herself. The witches still tolerate her shenanigans for one good reason: the tales of her mood swings and impressive group of yeti servants (nobody really knows why they obey her) are known across frontiers, warding off most undesirable strangers. » 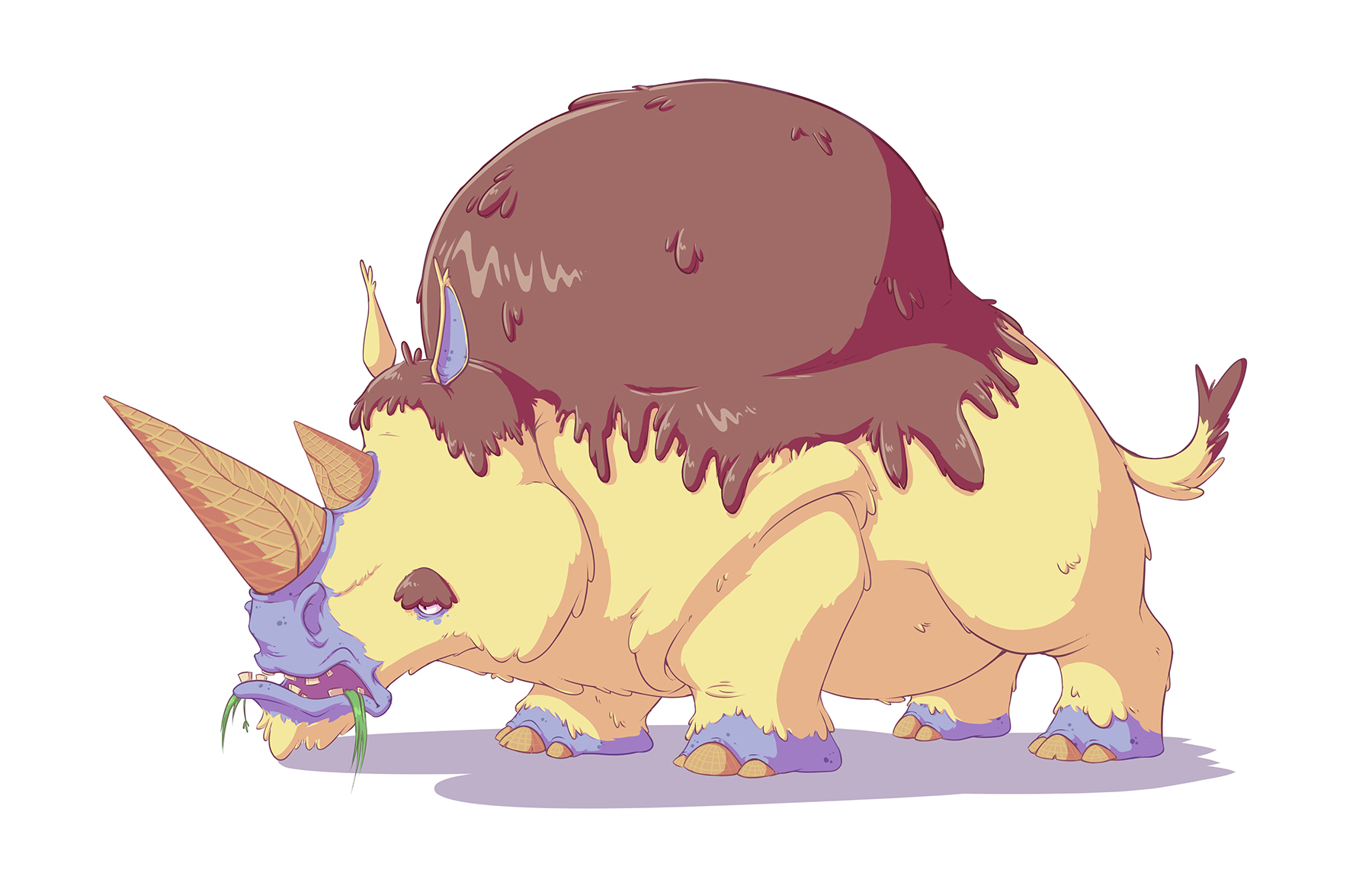 To create their traditional ice cap, ice witches use the horns of a rhinoceros species living on the glacier. Like many other creatures, they have evolved skin appendages made of hard biscuit. These horns grow during spring to attract mates. When they fall at the end of summer, they are subject to intense trades between witches. 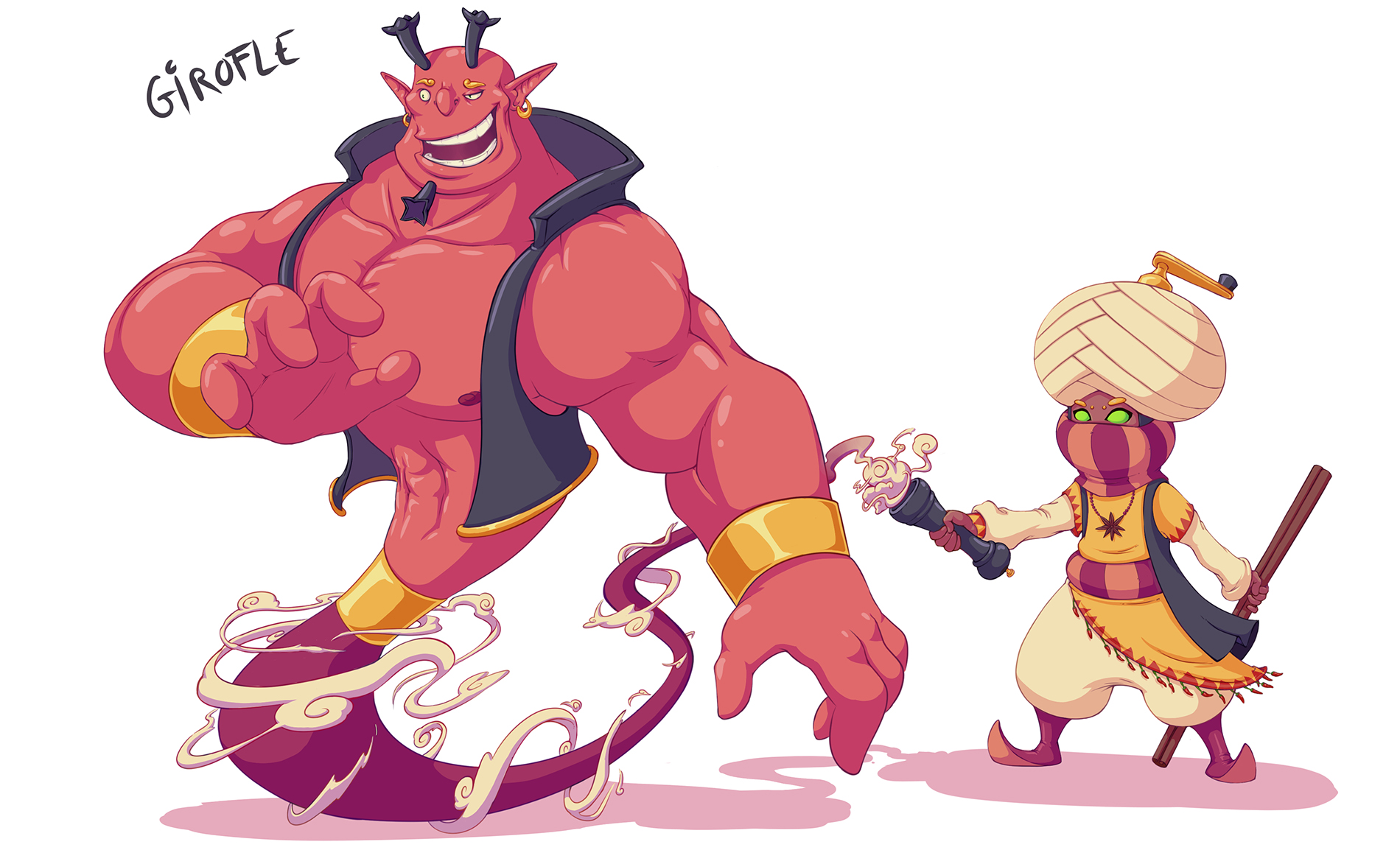 Anyone wanting to venture into the Spice Desert need to be guided by a local to avoid the illusions caused by its bewitching scents. These mystical nomads are even able to trap djinn-djers, elusive embodiments of spices, in magic mills in order to use their power. 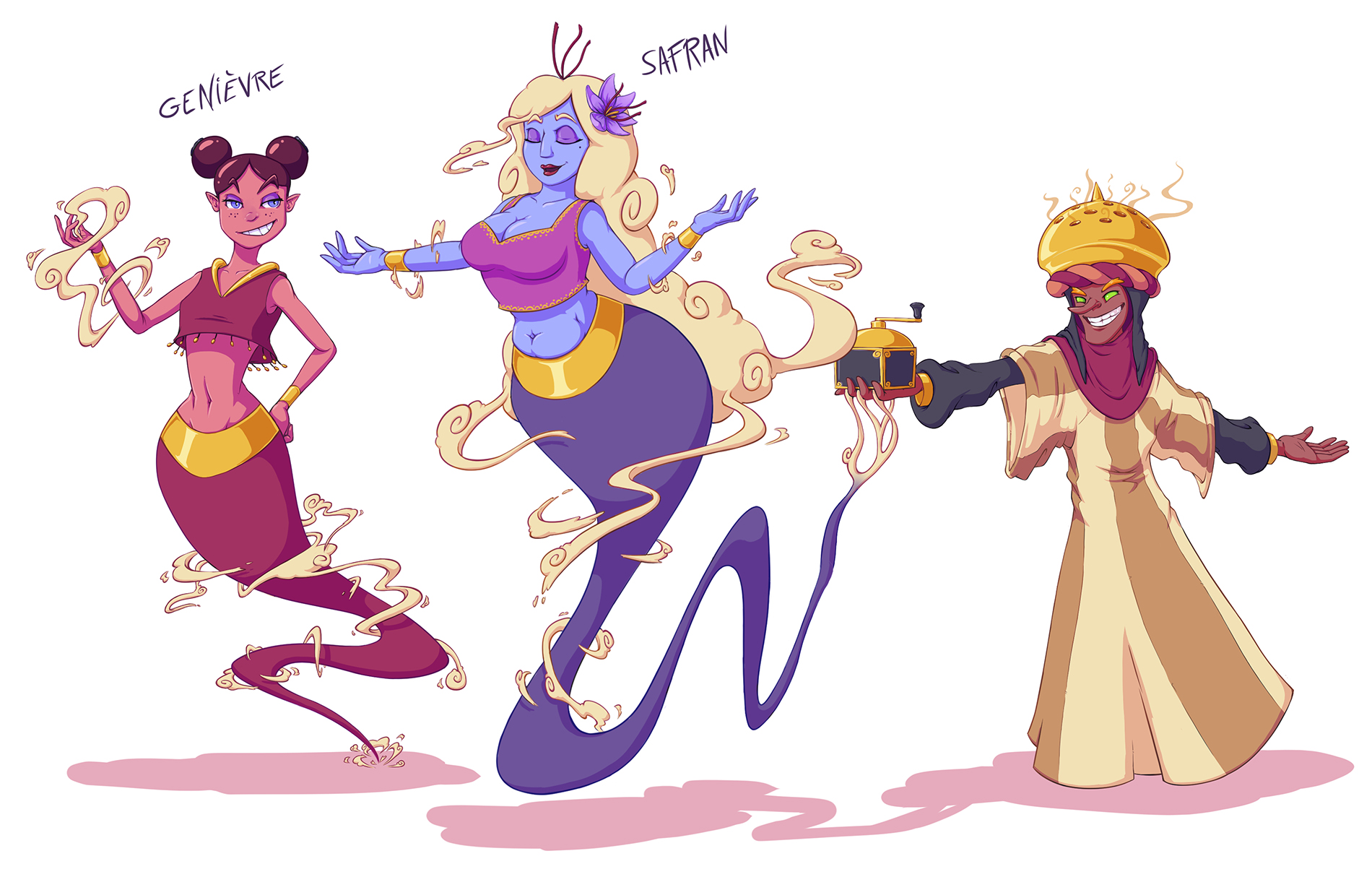 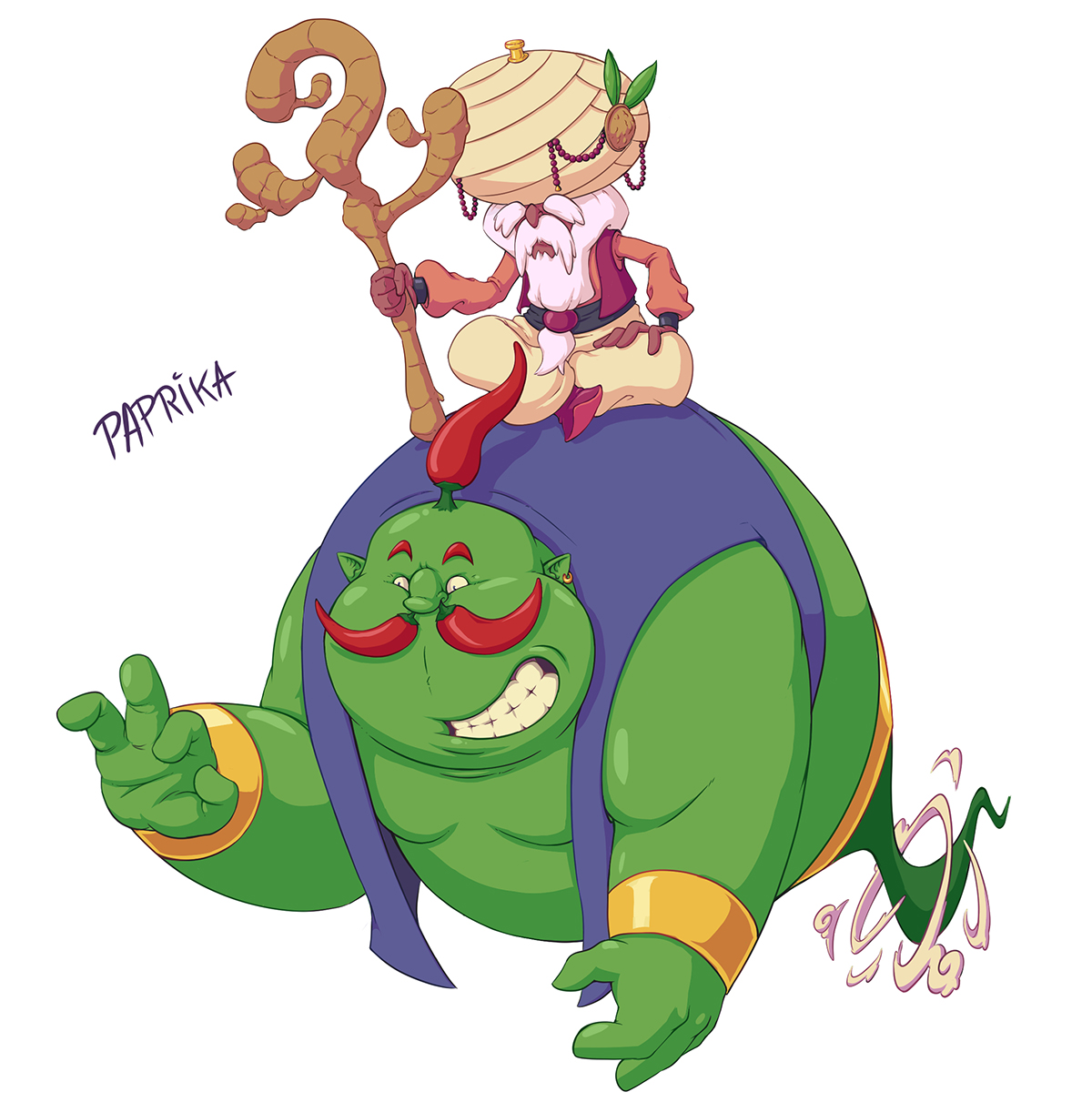